Mike Randall as Mark Twain, Saturday, May 7th at 2 PM.
Concessions and cash bar available.
Tickets are $10 PreSale and $12 at the door.
In 2022 Mike Randall will celebrate his 50th year of performing MARK TWAIN LIVE! His first show was in May 1971 at Rosary Hill College (now Daemen College) in Buffalo, NY
Mike Randall…began impersonating America’s greatest author at the age of seventeen! Two years later he was winning rave reviews at “The Buffalo Showboat”. At age 20 he had given a command performance at the State Department in Washington, D.C., and one year later he brought his rendition of the “Celebrated Humorist” off-broadway to New York City’s only Dinner-Theatre, “The Little Hippodrome”.
In five decades and more than two thousand performances later, Mike Randall continues to enjoy his close encounter with Mark Twain. Mike Randall is the only Mark Twain impersonator to be formally acknowledged by the Daughters of The American Revolution for his authenticity! Mike Randall has
brought “Mark Twain Live!” to dinner theaters, regional theaters, opera houses, schools, colleges, churches and private clubs, corporations, associations, museums, libraries, and historical societies around the country, delivering a “Breathtaking performance of remarkable subtlety and depth”.
“Mark Twain Live!” was endorsed by the Mark Twain Museum of Buffalo. Mike Randall was the official “Mark Twain” of The Annual Huck Finn Jubilee in Victorville California for a decade and the Annual Mark Twain Birthday Bash & Symposium in Buffalo, NY.
Several hours of makeup combined with the actor’s mannerisms, speech and Twain’s actual words create a startling realistic portrait of “America’s original stand-up comic-Mark Twain”!
Mike Randall is the senior Meteorologist at WKBW-TV Channel 7 in Buffalo. Mike is also an AP and UPI award winning feature reporter and has been with WKBW-TV since August 1983.
He was inducted into the Buffalo Broadcasting Hall of Fame in September 2017. Prior to coming to WKBW-TV, Mike worked as a Co-Host of “PM Magazine” at WFSB-TV in Hartford, Connecticut and at WDBJ-TV in Roanoke, Virginia. He received his Certificate In Broadcast Meteorology from Mississippi State University and has the received the Seal Of Approval from the National Weather Association and the American Meteorological Society. A Career “Highlight” for Mike was filling in on “Good Morning America”.
Also an award winning playwright, Mike’s plays including Shoot The Weatherman and Guns and Roses have been produced at Buffalo’s Alleyway Theatre.
Contact 716-868-1458 www.marktwainlive.com mikerandalllive@gmail.com
+ Google Calendar+ Add to iCalendar 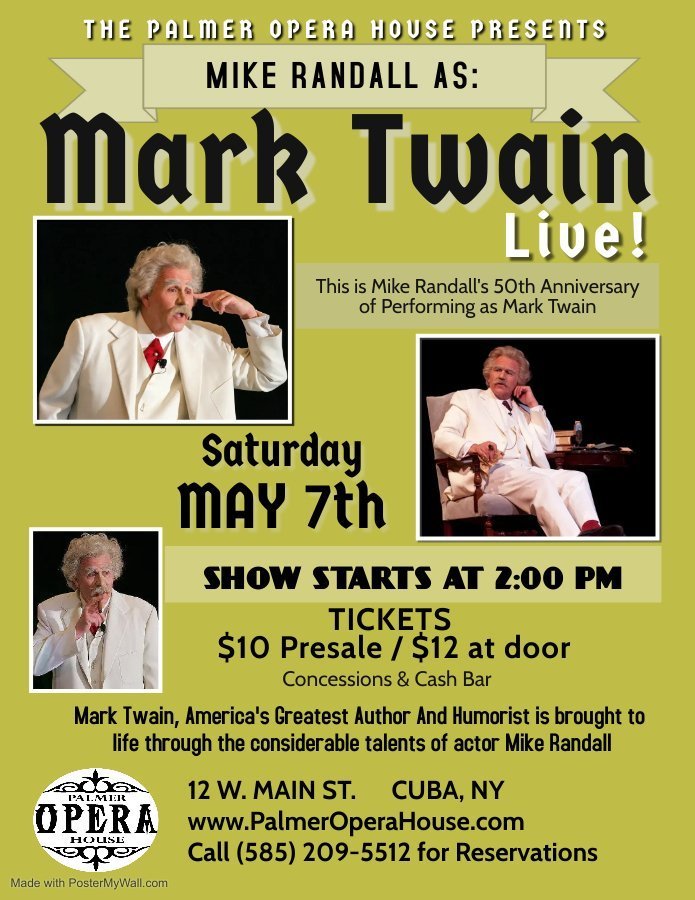