There is no secret that Allegany County is home to a great number of starving artists, creators, and writers, but there are also those who have literally changed the world in huge ways too. Okay, so the term starving artists may imply a lack of nutrition—and while we are often underpaid for our work or talents—we (for the most part) are not starving.

Sculptures of historic greatness can be found in a few unexpected places in Allegany County. In Bolivar that would be at the Bolivar-Richburg Central School building. They are home to some fine art pieces made by Caproni. 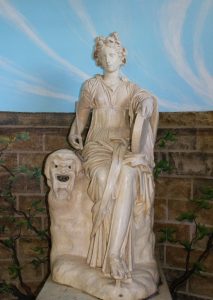 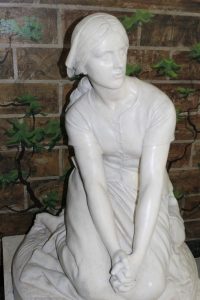 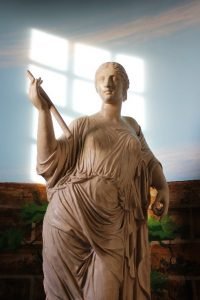 They are featured in front of hand-painted scenery done by another locally-talented artist and former BRCS teacher, David Bosworth. Abe and George are situated on matching sconces on a well-stocked wall of literature, and the female statues are as if they are in a well-tended stone garden with lush vines of greenery and bright blue skies; local windows of painted scenes complete the area. All five of statues are creations from the Pietro Caproni Studio in Boston, Massachusetts (known today as the Giust Gallery).

Caproni was a Florentine Master Craftsman, specializing in creating reproductions of Master Art Pieces. He actually made molds from collections in the Louvre, the National Museum in Athens, the Vatican, the Uffizi gallery, and the British Museum—something that would not be at all possible to do today.

He moved to the United States in 1900 and started his studio in Boston. The Bolivar statues have been in Allegany County since at least 1913. They were first placed in the original school house. Mr. Caproni passed away in 1929, so it is highly-probable that he supervised the creation of Bolivar’s collection.

In Wellsville, you will want to see the inside of the Wellsville Post Office. It was designed by Walter Olmstead and Fredrick Murphy of Washington, DC, and is considered modernist with having a Greek Revival influence.

There are two wall-length four-foot-high triptych bas-relief murals depicting local history of Mary Jemison and the formation of the Iroquois League of Nations,

and the early pioneer days of Allegany County. 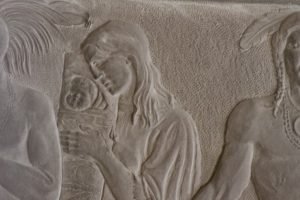 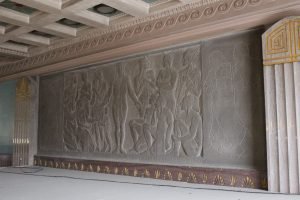 Brown is also known for his many pieces that make up the Gettysburg National Cemetery in Pennsylvania, and he also created the statue of Mary Jemison at Letchworth State Park here in New York.

Well-known Artists have come from here, moved to here, and have created paintings, murals, and things you’ve come to enjoy on both local and National levels. Each town has its own list of talented citizens who have contributed their talents in a number of ways, ways that keep us on the map as a county of Artisans. Perhaps through festival posters, interpretive sights of historic relevance, or those who can create portraits of expertise . . . these are those who make art come to life through their works.

On the top of the list of Professional Artists/Illustrators the names of Chet Swier of Cuba,

Dick Monroe and Eric Jones of Bolivar, Pat Shannon of Willing, Sarah Phillips of Houghton, and Traci Hetzel of Wellsville all come to mind.

There are also the works of Walker Metalsmiths of Andover, the Painted Ladies, 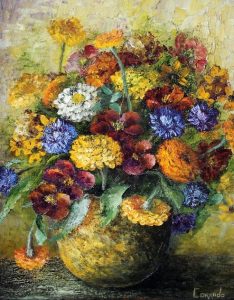 and the talented college town of Alfred’s many ceramic makers and metal workers. 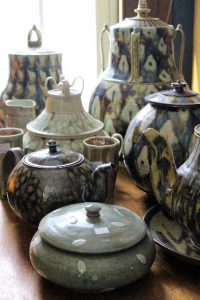 There is Angelica’s Three Sisters Pottery, and the very creative modern-day talents of White’s Imprints in Cuba.

Still not enough for your curiosity? How about Michael Kintner of Scio who revolutionized the world of photography with the invention of his 360 Rize camera which is used world-wide?  Yeah, he’s from Allegany County too.

Musicians cover all categories: country, rock ‘n roll, punk, grunge, rap, classic, and new age. Most come up through their fame from practice in a garage or basement, and a few actually learn through school and higher education. No matter which method they rise from you can see their raw talent comes from within—if they are successful. Talents from here often write from their experiences of life, and that is a never-ending pool of situations to draw upon.

Writers are also live here and work here. They draw from the quietness, their surroundings, and from their soul. They write about the people, the history, and nature—some combine all three.

There are so many creative people who live here, and there are art organizations you can become members of and most libraries offer classes as well in the arts: The Allegany Arts Association, BOFA (Belfast Organization for Artists), The Wellsville Creative Arts Center, Sheila Kalkbrenner’s Art Studio, the Fountain Center in Belmont–and of course you can go to school at Alfred University in Alfred for art and ceramics, or Houghton College for classical music!