Oil, the “black gold” as many reference it, was first discovered in America right here in Allegany County at Cuba’s Oil Spring Indian Reservation. It is a hidden attraction just south of the Seneca Gaming Casino by Cuba Lake. To see this historic place, it’s a short drive off Route 50. Once you’ve parked, you’ll be able to walk around and explore the tiny park of oil fame. You’ll walk over a small footbridge that spans over Indian Creek to get to the gated area of the spring. The original wooden cask that surrounded the spring has long since eroded away from the elements, but you can still see the spot where many Seneca had come to long ago.

It was early in the history of the Seneca when they first came across the spot where a black, sticky substance was rising from the water. They quickly learned of its potential as body paint, medicinal purposes, and as additive for making the flare of a torch. They would scoop the substance from the spring by sopping it up with blankets and wringing the liquid out by hand into pots. No matter how many times they repeated that process, the spring would replenish itself with more, seeping its way up to the surface from below.

Tribe members traveled near and far to get some of the mysterious liquid. In 1627 the Seneca people, brought French missionary, Joseph De La Roche d’Aillon, to the sacred spot, and he blessed the spring. This event was the first recorded discovery of oil on the North American continent. The area where the spring is located has been a one square mile Seneca Reservation lot since the Treaty of Big Tree in 1797.

In 1927 a monument was placed at the spring commemorating the discovery. A plaque there reads in-part that “Its history forms the first chapter in the development of the petroleum industry in America—a gigantic world enterprise transforming modern life.”

One thing soon became apparent. If there was oil in Allegany County in Cuba, most likely there was oil to be found throughout nearby areas too—and there was indeed. 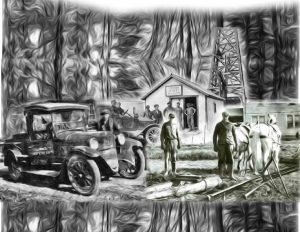 Oil was the driving force for the overnight population boom in the 1880s. Thousands of those seeking their share of becoming rich dropped everything where they were, picked up their families, and moved to Allegany County. The towns of Richburg, Bolivar, Allentown, Genesee, and Alma all became oil towns. Railroads were built to haul in the heavy equipment associated with the oil industry needs, and houses started dotting up the landscape. The hillsides were full of derricks, and the air was filled with the unmistakable scent of crude oil.

Unfortunately, the boom did not last, and today those towns mentioned above have a very small population. Many of the wells still produce oil today, and on a quiet night in the country you can hear the squeaky sounds of the jacks pumping.

The oil industry has made long-lasting improvements to society through plastics, especially in the medical fields.

The New York State Oil Producers Association recently held their 100th Anniversary. Bolivar has a large collection of oil field equipment at its two sections of their Pioneer Oil Museum. 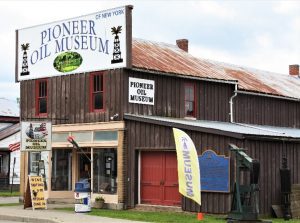 The Boss Street extension museum houses their “Wall of Fame” honoring those who were an integral part of the local oil industry. This extension is a work-in-progress, and is slowly becoming a must-see designation for everything and anything that pertains to the oil industry’s history.